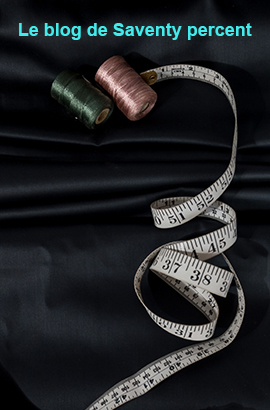 Graduated in stylism/pattern making after a course in ESMOD Paris fashion school, Carline has done different missions in different companies, between stylism and pattern making and is now working in freelance. As she has always had a deep and sincere interest and respect for the ecosystem around us, use a creative process as little harmful as possible has so been an evidence, from the beginning of her career in the fashion industry.

It is so driven by this conviction that she has officially launched Saventy Percent in Januuary 2021, in order to, more than the revalorisation and reuse of the materials, see a true cohesion between the different creative parts of the industry ,from international brands to young creators.

Because, hereafter a creation more respectuous of the environment, it is also to strengthen the respect and the mutual aid between different actors in fashion industry that she wants to see.